The international scientific community is much discussion and sought ideal diet for health promotion and disease prevention. The traditional Cretan diet since ancient times appear to meet those characteristics that make it excellent, as was shown by the study of seven countries, which began in 1960 and continues today. From this study, which included longitudinal follow a group of about 700 men rural area of Crete, it seemed that this population had the fewest deaths from heart attack and cancers compared with other developed countries. The population of Crete was the longest compared with other developed countries. 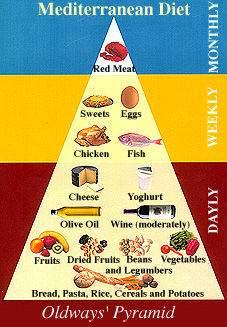 Feature was the fact that in 1991, when the Department of Social Medicine, University of Crete undertook the elderly in the 31st year of the study, the survivors in Crete was about 50% of the original population, while in Finland there were no survivors!

The excellent health and longevity is attributed to the traditional Cretan diet. The food was simple and wholesome olive oil gave about a third of the daily energy in each person, while most of the energy proercheto of cereals , mainly bread , legumes , vegetables , fruits and occasionally small amounts of eggs , cheese , milk , meat , fish and a little red wine with every meal. This simple traditional diet of Crete has deteriorated in recent decades mainly by the younger generations . The results are very unpleasant for population health and premature deaths from heart attacks and malignant neoplasms have taken epidemic proportions .

On the basis, therefore, the current data would suggest a return to the traditional Cretan diet, with a noticeable decrease in the amount and frequency of use of meat and other animal products. Unlike cereals (mainly bread), legumes, vegetables, and fruit should be more than 85% of our daily food ...

Olive oil , unlike seed oil is rich in monounsaturated fatty acids that are resistant to oxidation and reduce LDL cholesterol without affecting HDL cholesterol which protects against athirosklirosi ..... Olive oil contains a large amount of extra antioxidants as tocopherols and hydroxyphenol that protecting against atherosclerosis and (of various cancers by binding of toxic free radicals. Interestingly, the composition of fatty acids in olive oil is similar to that of fat in breast milk.